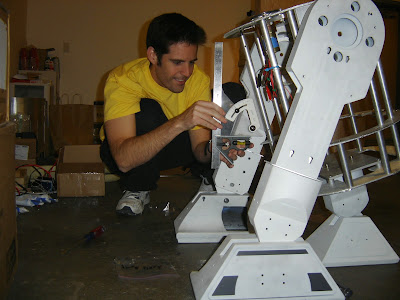 I was recently asked to write a brief bio of myself, re my experience as a maker of things. I wanted to post it here, since I thought it turned out decently.

When the first snap-hiss of Luke Skywalkers lightsaber hit the eyes and ears of a young and impressionable Matt Munson, a lifelong love affair with movie props had begun. My very first prop making effort was an attempt to duplicate Luke's saber using an atari joystick, a wooden dowel rod, and the testors model paints I had on hand. Humble beginnings indeed.

Since then, I have gone on to not only design, create, build and finish hundreds of movie and tv prop replicas for my own collection, but I have also made them for screens large and small. Some of my work can be seen in the upcoming feature film "Space Station 76" starring Liv Tyler and Matt Bomer. I built 3 robots and a robotic hand for that film. My work has also been featured prominently in many independent productions, such as "Batgirl: Spoiled" and "Aperture R&D". For my own collection, I have built a fully functional R2-D2 who walks, talks, and lights up just like the one in the Star Wars films. I built a full sized TARDIS, the blue police box made famous by the long running British science fiction television show "Doctor Who" and am currently knee deep in a replica of the Batmobile as driven by Michael Keaton in the 1989 Tim Burton Batman film.

I run the youtube channel "The Project Work Bench" where I produce tutorials, project walk-through videos, interviews with fellow builders, behind the scenes videos, and updates on my large scale projects. Tutorial videos often focus on a very specific task involved in prop making, such as fiberglass layups, or silicone mold making. One of my more popular series' shows a step by step walk through of my build of Batman's Grapple Gun from the Arkham Asylum video game. The series starts with a simple sketch on a piece of paper, and goes all the way through to final painting and weathering. I also keep a blog which documents at a different level of granularity some of my builds.

I work in a variety of media. I have found that the nature of the project typically dictates what materials will need to be used to complete it. I sculpt in clay, I weld, I machine. I fabricate using wood, plaster, styrene, fiberglass, resin, metal... whatever is needed. I sometimes make electronics to suit the needs of the project. I paint, I sand, I weather. I like to think of myself as an extremely versatile creator of all things interesting. I'll take on a project of any size, as long as it's interesting to me. As Yoda is fond of saying: "Size matters not". Even if it's something I don't know how to do, I find the learning process one of the most rewarding elements in any fabrication effort.