I am a little behind on blogging, and have not made entries that show all of the work I've done over the past week toward figuring out what I need my final screen art to look like. I'll get on that eventually.

But, the news today is that I finished the artwork up tonight based on all of the research, and submitted it to Westar, who is going to burn the screens.

All told, this will be the largest single outlay of cash for this project. The two screens, plus shipping, are going to run me about a thousand bucks. Yikes. I hope I can get some good use out of them.

Because of the weirdly high costs, I'm pretty sure I'm going to be offering a run of fabric for fellow Superman Returns enthusiasts who want to make a really accurate suit.
Posted by MattMunson at 3:21 AM 1 comment:

After a lot of testing, and a lot of squinting at reference photos, I've decided which patterns to use in the creation of the final screens.

I'll post some pics later of my progress and experimentation, but just wanted to make a note that I've made up my mind.

I need to get the artwork finalized and sent out to Westar asap so that they can start burning them. I would like to get that done by tomorrow night.
Posted by MattMunson at 9:43 PM No comments:

After a lot of testing, and a lot of squinting at reference photos, I've decided which patterns to use in the creation of the final screens.

I'll post some pics later of my progress and experimentation, but just wanted to make a note that I've made up my mind.

I need to get the artwork finalized and sent out to Westar asap so that they can start burning them. I would like to get that done by tomorrow night.


Posted by MattMunson at 9:43 PM No comments:

Recently, I've been putting a lot of thought into how to recreate the hem seen in this picture. 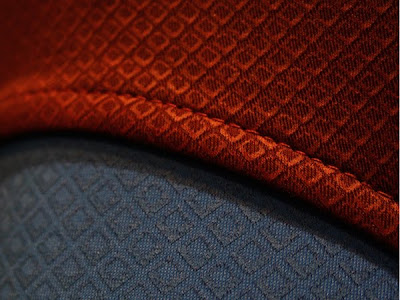 It looks like it's stuffed, and thanks to some advice from some online costumers, I've gotten some ideas. First, I'm going to try to line the briefs with swimwear liner, and I'm also going to use a thread called "wolly nylon". I have ordered both of these online over the past few days, and expect them to arrive shortly.

In the mean time, I wanted to do a little experimentation of my own, with what I had onhand. I have never used a rolled hem foot on my sewing machine before, but as luck would have it, mine came with one. I loaded it in, and got to work. 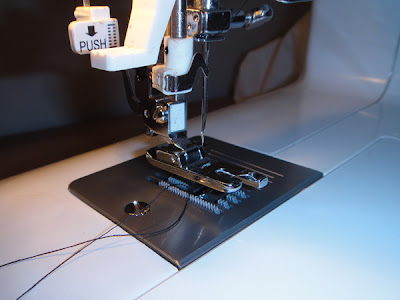 Though it's a bit sloppy, this is pretty much exactly the effect I was hoping to get. I don't even know if I need the lining, but I suppose it could only help to make it a little more puffy. I guess all I really need to do is practic my technique so I can get a straight hem every time. 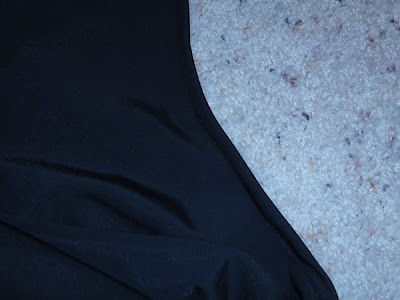 Most surprising is the amount of stretch I get out of the straight stitch that I used to sew this hem, even though it was regular cotton thread. I imagine the results will only be better once I fire up the wolly nylon.

In other news, I picked up a few supplies from the fabric store the other day. The seam ripper is something I've needed for a long time, though an exacto blade has been filling in for it in the interim. The no-fray stuff is all for serger chains that I will sew back into themselves using those big-eyed needles. Just building the tool set, I guess. 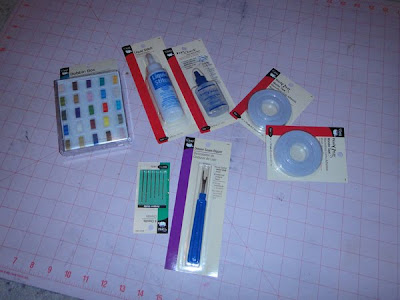 Posted by MattMunson at 5:48 PM No comments:

I finished my first attempt at the new leg pattern, and overall I'm very satisfied with the results. As with all of these things, there are some minor tweaks to make, but in essence, it was a success. Let me walk you through the steps.

First of all, it is currently snowing in Columbus. Which makes doing ANYTHING pretty much a total nightmare. And I'm not just talking about the traffic. Psychologically, it's just really tough to get out of the house where it's nice and warm. I hate digging snow or ice off my car. Such a bore. 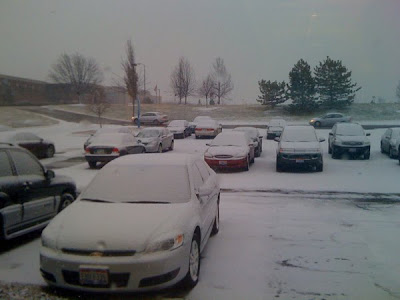 Despite the snow, I made it down to Kinko's where they printed out my pattern. Because I had resized it, the dude was able to print it out on two pieces, rather than four this time. That will make my job much easier once I get home. Here's a pic of the large format printer at the Kinko's. 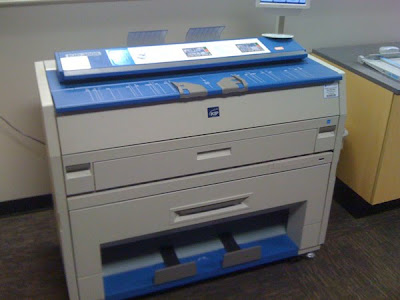 Here are the sheets as they came out of the printer from Kinko's. Because I was expecting there to be four parts, and have no advanced knowledge of where the page breaks would be, I put in a series of registration lines that I could use to align the diffferent pieces. Because there were only two pieces, most of those lines became unnecessary. You can see where I have overlaid my previously made leg pattern on top of the new one. It's scaled almost perfectly to it. 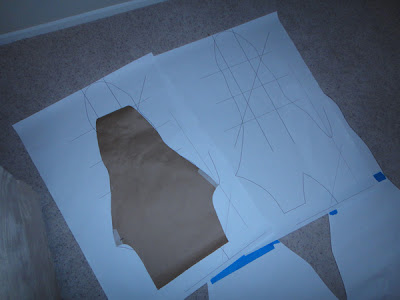 Here's the pattern pieces all cut out and taped together. 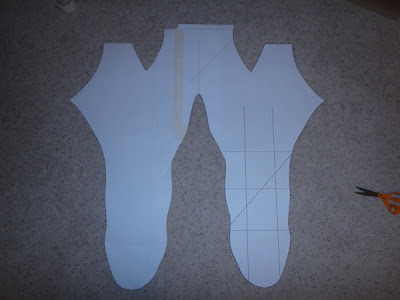 I then rolled out some fabric I had, and traced around the pattern. 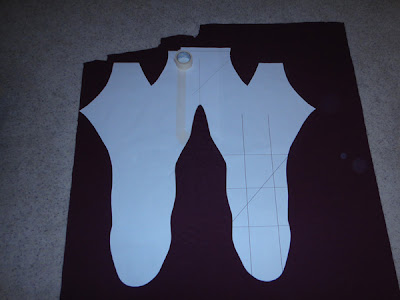 Here is the final product. Obviously, you can't really tell much from this photo, but the fact remains that they are pants! The fit is pretty good. I guess my scaling job worked rather well. I will need to do some adjustments around the legs, and I will probably eliminate the feet, as those are not needed in this suit. 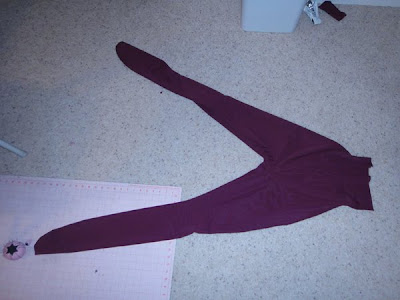 Overall, very happy with the results.

The step I'm anxiously waiting on right now is to complete the screen print tests. Once those are done, I will be able to kick the screen printing stuff into high gear.
Posted by MattMunson at 10:23 PM No comments:

For sake of thoroughness, I wanted to inform my dear readers of some last minute progress tonight. I did some measuring of the artwork for both the body suit and the briefs, and wrote an email to Westar to get a quote. Though I have not finalized the measurements, I am close enough to request a quote, so at least I know what I am getting myself into.

I also did some tiny changes to the legs artwork shown in my most recent previous post, and transferred it to a flash drive. I will try to get over to Kinko's tomorrow to get it output.
Posted by MattMunson at 10:55 PM No comments:

In this thread, I discussed the process I went through to put together a drawing for the leg pattern. A few days ago, I managed to make my way over to Kinko's to get it printed out.

Because the printer wasn't big enough to do it in one shot, I got four pieces printed out. 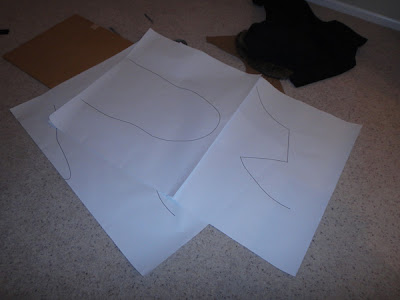 And after a little bit of cutting and taping, I ended up with the completed pattern. This picture is upside down, so whatever perspective mess it makes, I'm hoping that the payoff is that it's recognizeable as legs. 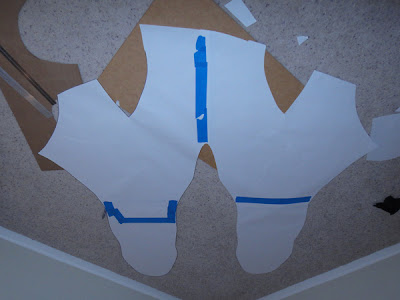 Flash forward a few days to tonight, where I was thinking about how big the screen will need to be in order to get the diamonds printed onto a piece of fabric this wide. The paper pattern you see in the picture above is REALLY wide.it's like 70" or something rediculous like that. That seemed like an awful lot.

But then I had something of a brain storm, and realized that I had already put a lot of time into developing a very form fitting single leg pattern for the lower half of the body. I laid that on top of my new pattern, only to learn that my instinct was right. I had grossly oversized my new pattern. 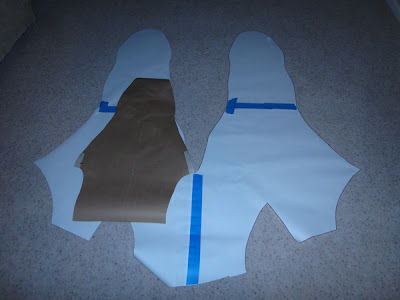 Not really a big deal at all, as the paper print out cost me under 20 dollars. So it was only a few bucks lost. The other thing I realized is that there was a problem with the original artwork that I needed to correct. On the spiderman suit, from which this pattern is taken, the waist has a v-taper on the back. This is to match the web patterned belt-thingie that spidey wears. I corrected that in my drawing, and also scaled it all down to match the measurements of the single leg pattern I had drafted previously.

Also from the lessons learned the first time around, I added in some registration lines so I can get both halves lined up perfectl. Here's what it looks like now: 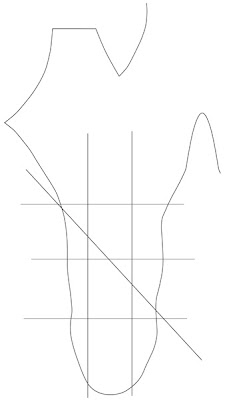 I will have the dude print out two of these, then I will tape it up, and it should be much closer to the size I need. Its also MUCH smaller, which means I won't need such a huge screen for the final artwork.
Posted by MattMunson at 10:41 PM No comments:

No pictures today, just a logistical update on the silk screen action I'm working on.

I got an email today from Westar telling me that both of my screens are on their way, along with some white plastisol ink I ordered from them. This is a different blend of Plastisol, and is kind of the "standard" ink for screen printing on fabric. it's a little thinner than the stuff I used previously, and doesn't stack up the way the other stuff does. It will make for an interesting experiment.

The two screens on their way are the sample screens for the different diamond patterns. One for the briefs, one for the body suit.

I also ordered four different colors of speedball inks to help out with the She-Hulk project that Laamberry is doing. I got some black and white, so that I can mix a light grey. I also got some blue and red so that I can mix a good purple for the sides. I'm going to have to move quickly with the testing of the screens so that I can order the final screen. LB needs the screen printed fabric by end of month so that she'll have time to sew together the costume for her event.

So basically, I've got a bunch of stuff coming in the mail.

End of line.
Posted by MattMunson at 1:11 PM No comments: