Things have been moving slowly lately, but they are still moving. I'm sort of under the gun right now, as I am going to be moving to Ohio in about a month. So I really need to get this cape project finished up, and get a couple of pulls out of the mold before I leave. I don't think I'll be taking the mold with me, as it's huge!!!

My current dilemma centers on that big table I built to mold the cape. Recall that the main reason I built that table is because my garage floor is slightly graded. My fear was that if I put the cape on the ground and pour rubber on it, all the rubber would run off to one side. I also didn't think it would be very clean on the garage floor, and didn't want to damage such an awesome piece of film history. So I build that big table, and it served its purpose.

But now there are some complications. Because the cape was stretched taut across the table, it hid the seams between wood panels pretty well. But now that the mold is just laying face down on the table, the seams are beaming through. Not good.

Recall that the next step in the process is to make a fiberglass matrix mold for the rubber mold. This way, the rubber will be flat, level, and stable when I go to pour the latex into it to produce a cape.

I don't want my rigid matrix to capture the defects of the wood table, so I needed to think of something else.

After mentally exploring a few options, I decided on a course of action. I rolled some butcher paper down onto the garage floor, and taped it into place. I then put the cape mold over that. Fail! The bummer with the paper was that it had a bulby texture to it. I don't know how to describe it, but when the mold was on top of the paper, it was anything but flat. Change of plans.

I went to home depot to try to find some sheet plastic. I found some stuff that is used as a moisture barrier for laminated floor wood. Looked good, and it was only 12 bucks. The next option was about 50 bucks, and was for painters tarp. The rolled up kind. I probably should have gone with the painters tarp, because when I got the sheet plastic home, I had similar results to the paper. When I rolled it out, it had all kinds of big bumps on it. Not good.

So I abandoned all that, and decided to just put the mold on the concrete floor. There's no cracks in the floor, and it's pretty flat, with minimal texture. BUT, the bummer is, I've been doing project work in my garage for a couple of years now, and there's all kinds of gunk that has accumulated all over the place. Dried resin, fiberglass resin, 1630, silicone rubber, all kinds of stuff. I spent a couple of hours with a paint scraper and my sander going around cleaning up all the little imperfections in the garage floor. I didn't want huge bumps all over the place.

After that, it all came together really quickly. I laid the mold really flat, and went around the edges with masking tape UNDER the cape. This is to keep the fiberglass from bonding with the concrete. I'll spray some release agent onto the tape before running the fiber, and that should allow it to lift up really easily once it's done. 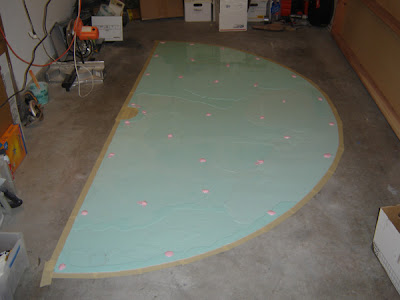 The last thing to do was create some keys on the mold. This way, I'll be able to align the rubber mold perfectly within the matrix once it's all done. Though the mold has some surface detail to it, I don't think it's enough to really help line the stuff up when all is said and done.

I had considered cutting up an old mold and using cubes of rubber as keys, but instead, I just mixed up some rubber with the thixotropic catalyst, making it behave like a putty or spackle. Then I just dropped big gobs of the stuff across the cape mold. 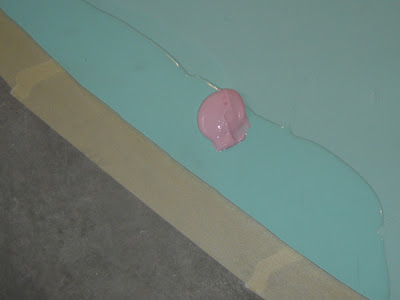 I'm going to let that stuff cure, and then I'll be ready to run the fiberglass matrix. I'd REALLY like to get that wrapped up before the end of Saturday night.

Stay tuned.
Posted by MattMunson at 7:30 PM No comments:

Who Said This Project Was Dead??

I've been out of town for the last couple of weeks, and didn't make any progress while away. But I'm back, and things are happening.

First up, I did a test the other day of the cape mold. Brushed in some urethene, and then placed some fabric on the back of it as it dried. Results were not so good. The urethene is not opaque enough, and you could see the fabric through it. That was a bummer. Also, it's too rigid. I can always use a lower shore urethene, so that's not a problem, but the opacity is going to bug me.

So I'm switching gears. I'm moving to latex. In fact, I just ordered a couple of quarts of latex rubber from www.burmanfoam.com. It should be here in a couple of days, so I expect to do another test once it arrives.

In slightly sadder news, the folks who are making my boots have dropped the project. They had a story about how it costs too much, and the economy downturning and all. All valid excuses, but it still sucks. Not sure where that leaves me as far as boots go. I might try to do it on my own. We shall see. Not sure.
Posted by MattMunson at 12:10 PM 1 comment: