I drew these up in Adobe Illustrator and had them laser cut on black plexiglass. I used some 300 grit sandpaper to knock down the sharp edges, and now they are ready for molding. I need to bevel the edges and do some surface contouring. The overall shape is really nice, and I'm happy with them. 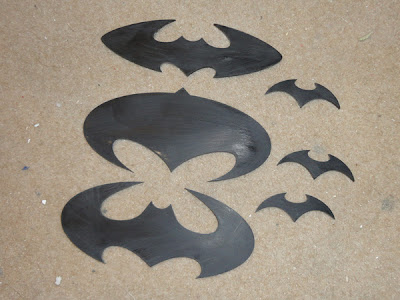 Posted by MattMunson at 3:09 AM No comments:

I'm taking full advantage of the beautiful SoCal weather today, and got some painting done. Nothing makes paint dry better than some direct sunlight on a warm day.

Here's a couple misc batarangs I'm working on, along with the side disks to the Arkham City grapple gun. 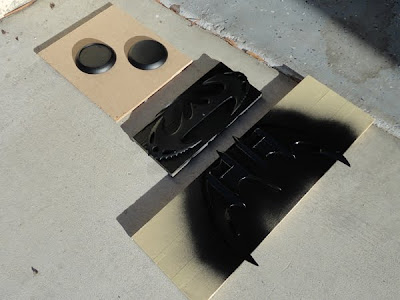 A few more side disks to the grapple gun, just after some primer. 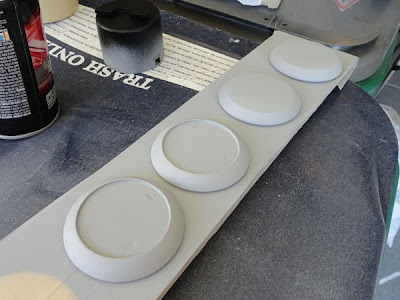 Posted by MattMunson at 4:17 PM No comments:

This always happens. It's not a bad thing, just more of a funny observation.

I went to buy these: 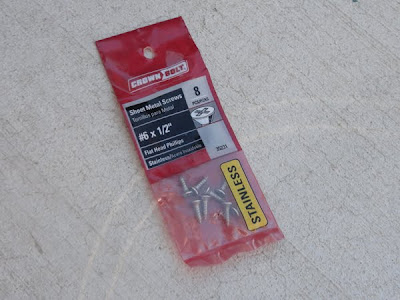 And in passing by the tools section, I realized I've always wanted one of these: 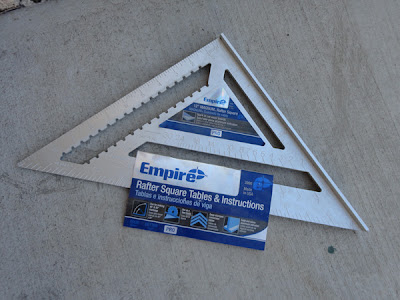 I own a couple of t-squares, but they are all "Hobbyist" level. The main one I use has the top part of the T held in place by screws, which means it's always moving around a little, and difficult to get a perfect 90 degree angle. This should do the trick from now on. A nice little tool to add to the arsenal.
Posted by MattMunson at 4:14 PM No comments:

This is really unrelated to anything I'm doing on this blog, but I wanted to post it in case my pal Bill Fischer happens to be catching up over here. Consider this a proof of concept for the upcoming Stickmen:The Movie.

Posted by MattMunson at 4:53 AM No comments:

I realized today that documenting a project via episodic youtube is a VERY time consuming effort. I am many months into this build, and I have to believe that one of the reasons it is taking so long is because of the overhead involved in filming and editing the vids. Still, they are their own reward, so I'm not complaining. The purpose of the build isn't really to get a grapple gun, but is instead to make a set of videos that will forever more be used as reference for my fellow prop builders.

I have finished cleaning up the new batarang master, and I am quite happy with it: 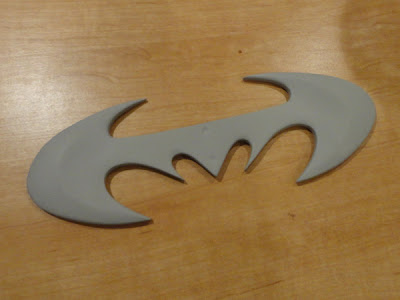 Please recall that this began life as a casting taken from an ICONS Ice-Rang from the movie Batman & Robin. It didn't really take all that much work, but the work took place among numerous other in-flight projects. I would like to get this under rubber tomorrow.

Mermaid tail master pattern continues. I'm roughly half way done gluing down all of the styrene. It's just very meticulous and boring work. I try to do the scales in sets of ten strips. That's about all my patience can handle before I have to switch gears and do something else.

Zero progress on Han in Carbo.

I've started a new project too. Vic Mignogna / JediVic has asked me to build a Star Trek Tri-Viewer, as seen in the conference room of the original NCC-1701 Enterprise. This will be used in his upcoming series "Star Trek Continues." I'm very excited to be able to contribute something to this production, which promises to be the finest fan made Trek show to date. I've done some initial research, some preliminary drawings, and have kicked around a few details with some fellow trek enthusiasts on the RPF. I have some dimensions that feel good. I think the next step is to build a mock up.

I'm also making a series of props for a project that I don't think I'm allowed to talk about at this time. So far, it's been a really fun process. I designed a few props using adobe illustrator, while going back and forth with the producer using iphone photos over txt message. It's really amazing how technology allows people to collaborate in ways that would simply not have been possible a few years ago. As it stands, I will be delivering about a dozen or so props to this production, though a few will be duplicates.

So as you can see, there's a lot going on right now.

I'll end with a quick story. The other day, I was having lunch at Dreamworks with a friend. (does that count as a name drop?? If you name a studio? is that a name drop????) He was giving me the tour, and he spotted a co-worker/friend of his a cube or two away. He said he wanted me to meet him, as he was cool. My friend introduced me as "Matt" and the guys response was "Oh! Rise of the MattMobile! I love your blog!!!!"

I tell ya man, it's a funny old world when little ol' Matt Munson is being recognized by people who work at a major Hollywood studio! It was a pretty major day for me, as I assumed the PREVIOUS time someone recognized me from my videos/blog was bound to be the last.

In closing, I really do want to give my honest and sincere thanks to all of the folks who read my blog, watch my videos, give feedback, and tell me that they either enjoy the blog or are learning something from it. It's really VERY gratifying to know that my hard work is appreciated, especially when it is appreciated by people who I respect and admire. So thank you!
Posted by MattMunson at 6:33 AM No comments:

Based on some dimensional help from the good folks at the RPF, along with a couple of great screen captures, I'm starting my initial design work on the Tri-Viewer.

Here is my first stab at a front view. 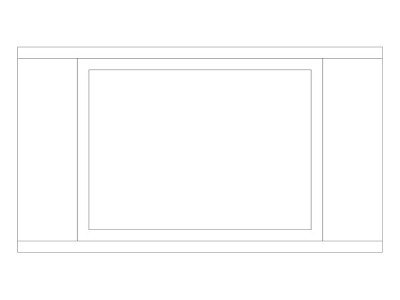 This does not include the thin pyramid that will be on top.

The question I struggle with now is one of side view. Are the top and bottom lips angled, or not? 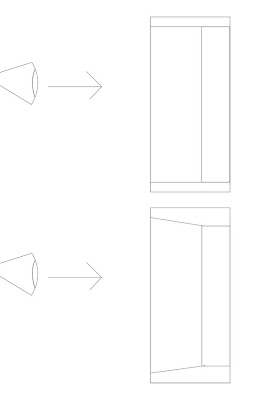 For reference, the part I have highlighted in red is what I'm referring to as the "lower lip". There is a corresponding "upper lip" directly above it on the tri-viewer. 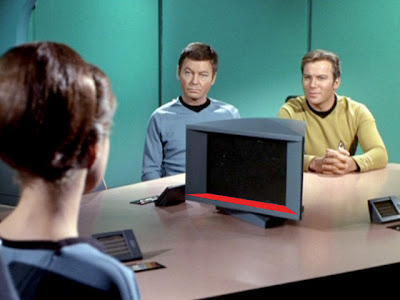 My latest theory is that the side view is like this. Flat on the bottom, angled on the top: 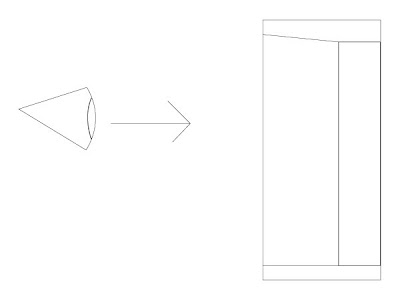 Posted by MattMunson at 9:44 PM No comments: 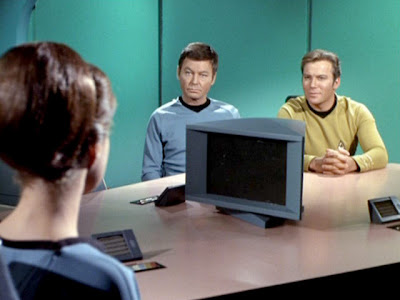 I have been asked to build one of these. I think it'll be a neat and fun little project. No idea where to start. It's these kinds of "Sky is the limit" projects that I find fun and interesting. Time to start doing some research.
Posted by MattMunson at 7:48 PM No comments:

I am selling off some resin kits I have sitting around. Send me an email if you're interested. 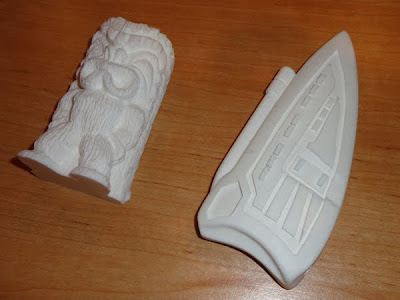 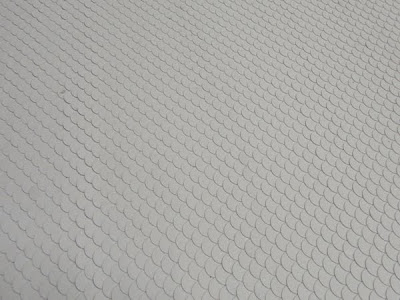 Progress continues on laying out the scales. These were all laser cut. It's quite a meticulous process to get these strips glued into place. I'm trying to get them as uniformly spaced as possible. I also ran out of the glue I was using, and it took some time to find the same stuff again. Amazing E-6000. Great stuff. Turned out Michael's had it, which is rare for them. To have anything of use, that is :)
Posted by MattMunson at 11:50 PM No comments:

This post is not really prop related, but it will explain why I've been slacking lately on prop and other project progress. I've been busy scanning photos! About three or four years ago, I decided that I wanted digital copies of EVERY Munson family photo I could get my hands on. I gathered everything together, organized both prints and negatives, purchased a really nice high end scanner, and got to work.

Like many other projects, this one saw its ups and downs. It's very tedious work, that is highly repetitive. This is the type of work I loath, and as a result, the project often languished.

However, I got a bug up inside me recently to get it done again, probably due to the fact that my house is now all set up and everything is out of storage. It took a few weeks of pretty intense work, usually anywhere from three to six hours a day.

But as of right now, it's all done!!! yay! Now all I need to do is duplicate the archive to a few different external hard drives or optical media, then distribute them across the globe. That way, all my photos are protected forever! whoohoo!
Posted by MattMunson at 11:11 AM No comments: 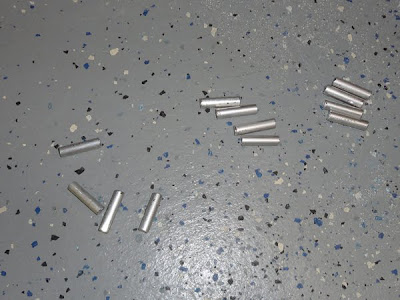 Just a tiny update on the grapple gun. These are some aluminum pins I cut the other day to hold the different parts of the gun together.
Posted by MattMunson at 6:26 AM No comments:

Much progress has been made on the side panels, though little has been documented. I will try to catch up here.

Here is where things start. With a coat of primer. 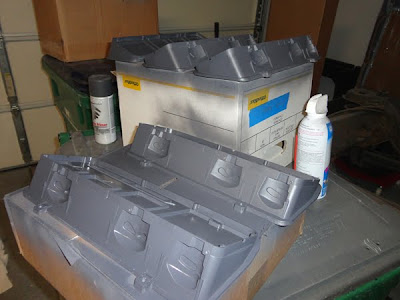 Once the primer is dry, I cover the face with a coat of light metallic grey. This will be the parts that are covered by the masking tape, then revealed later on in the process. 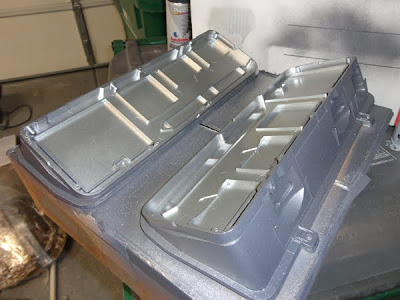 Once all of the masking tape is applied, I spray a couple of light coats of a much darker metallic grey to the panels. This might be a little too dark, but I can always lighten it up a little bit later with some weathering. 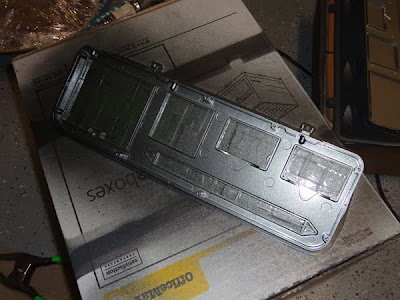 Based on a recommendation from a guy in the R2 Builders Club, I'm giving this tape a try for this project. 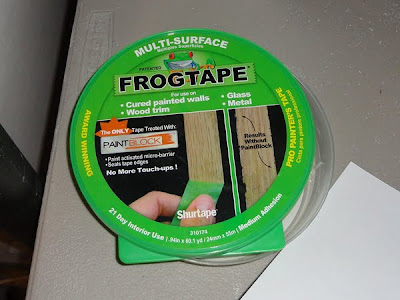 And here is where things stand right now. I have a few panels that are unmasked, a couple that only have bright silver, and a couple that are masked and painted with the dark grey. 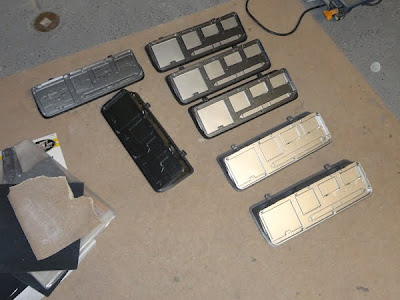 Overall, I'm pretty happy with the frog tape. It's a little easier to manage than the normal blue tape, but honestly, doesn't provide significantly better results. I got some bleed through, but I cannot say for sure if it was more or less than with blue tape. I think it largely boils down to how well you prep the pieces, not so much what tape you use.

For all of these panels, I was drying them under a space heater in the garage. Though it's not "Ohio Cold" out here right now, it's cold enough that automotive paint won't dry properly under ambient temperatures. Without a space heater, it takes on a foggy finish, which is no good.

Another lesson I relearned on this project is regarding patience. When you spray on the second color, it needs a couple of days to fully dry. If you try to remove the masking tape before it has fully dried, you risk the paint peeling up along with the tape. So be patient. Let your paint fully dry.
Posted by MattMunson at 5:59 AM No comments: