Thanks for all the inquiries. This jacket has found a great home, and I'm happy to have passed it on at such a great price.

LITERALLY never worn, this is the licensed jacket from Museum Replicas that came out with the release of Iron Man 2. 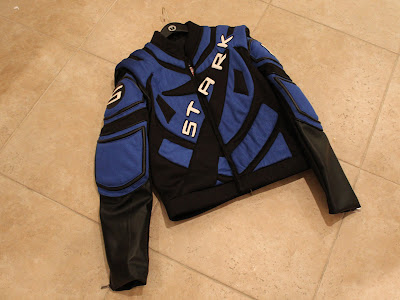 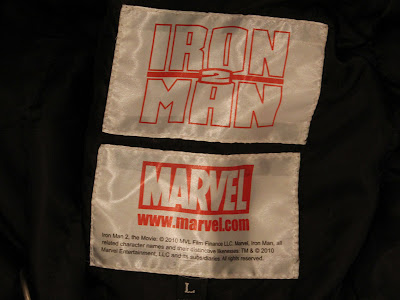 Posted by MattMunson at 4:05 PM No comments:

I'm very excited to announce that this morning I was asked to participate in the making of season two of Wayside Creations' Fallout: Nuka Break! Whoohoo! I'll be shooting all of the behind-the-scenes footage, and then putting together a series of vignettes to be released alongside the episodes. Should be a lot of fun, and I'm really looking forward to it.

Until then, be sure to check out season 1

Posted by MattMunson at 12:52 PM No comments:

Those of you who know me know that I'm not big on name dropping. But since this is hobby relevant, and Adam happens to be a pretty big dude in the hobby, it seemed appropriate.

The story behind this is pretty short. I traded Adam a couple of things in my collection for these. I gave him the stuff at Comic Con this year, but he didn't have the opportunity (or desire) to lug the tools down to San Diego, so we had to find a good opportunity when I was up in San Francisco to pick them up.

As luck would have it, Adam was throwing a halloween party in his "man cave", and I got an invite. One quick road trip later and I had a trunk full of new machining equipment!

Here's the break down:

Here's the mill. For reference, this is the mill and lathe that Adam made his legendary Blade Runner blaster replica with. When I was loading them into my car, I asked Adam if there were any tangible limitations to the pieces, and his response was that it really comes down to size, and knowing what you're doing. If you know how to machine, you'll get great results with these machines. 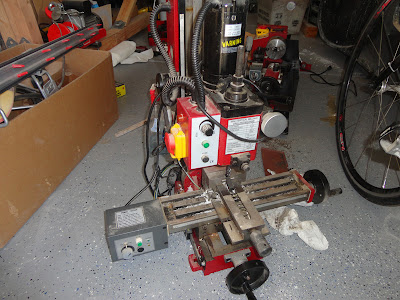 This is the DRO that Adam added to the mill. 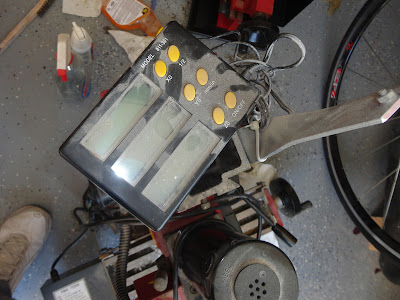 The mill also has a motorized feeder on it, so I can get really smooth, uniform cuts. 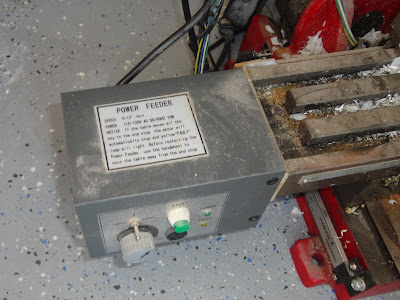 Those two accessories are immensely helpful, and should aid in doing some pretty awesome stuff, once I get everything set up. 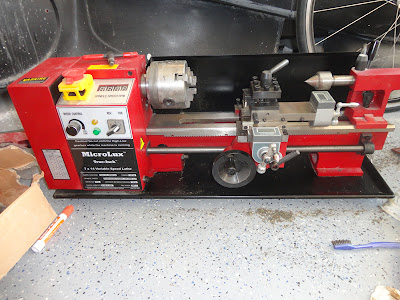 Which also has DRO's onboard. 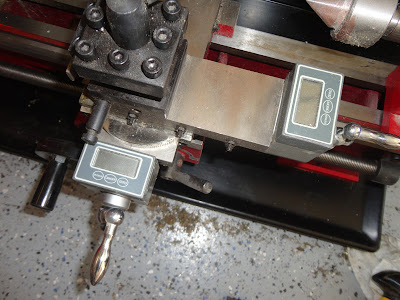 Adam also threw in a big box of misc accessories. I still need to go through all this stuff and figure out what they do!!! 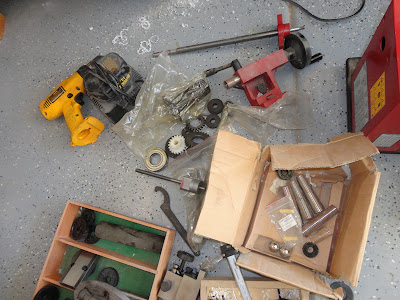 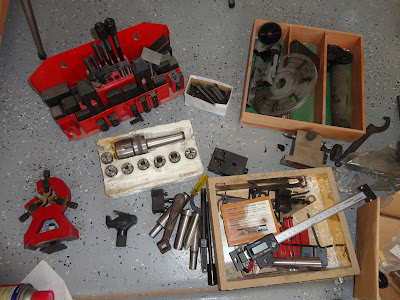 And lastly, here's a pic of Adam and I right before his party got started. I'm wearing my UD Replicas DareDevil suit, and Adam is in his Master & Commander attire, which was very nicely done. 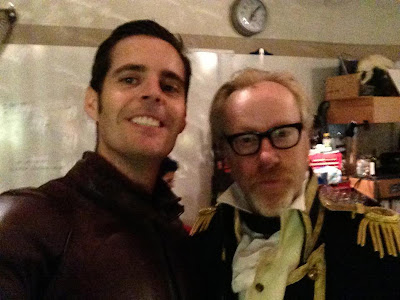 The party was super fun, and it was great to finally have a chance to poke around the Man Cave. For reference, this is where Adam's episodes from the website "Tested" are filmed. As fortune would have it, the guys behind Tested, Norm & Will, were both in attendance, and were super fun to chat with about the MattMobile project, and other stuff that is in the works. With any luck, The Project WorkBench will be making an appearance in an upcoming episode of their series.

MattMobile: More Of The Same

I spent a couple hours today just doing more of the same nonsense that you've seen over the past few posts. Puttying and sanding. It's actually kind of fun, and I'm enjoying it right now. Though I'm sure this will pass. I think this might be the last set of pics I take of this process until I have something worthy of showing. I'm sure my three blog readers are growing weary of similar looking photos.

But first, the big piece of non-sanding work I finished up today was cleaning the edge of this intake. Recall that previously I sawed the disk out with my reciprocating saw, then went in with a sanding disk drill bit and worked out the excess. Nice and smooth now. 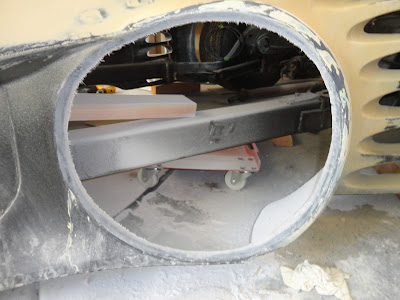 Nothing terribly interesting here, just a shot of the fender and how it looks after some wet sanding. 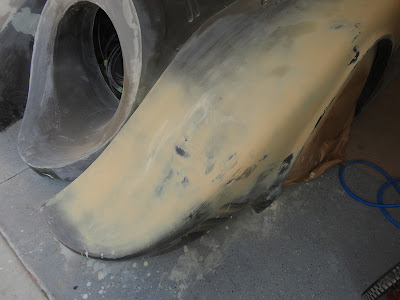 I've been doing a lot of "sculpting" on the rear fin. Those scallops all have a seam line running down the center of them, and there's some weird asymmetry to them. Here's how it looked after the first clean up pass. 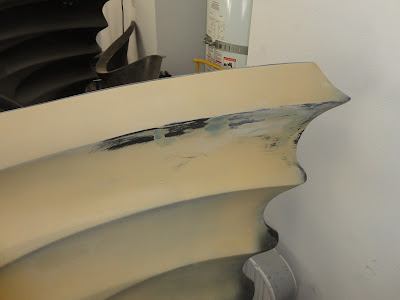 And here's where I slobbed in a bunch of putty to fix one of the inconsistencies. 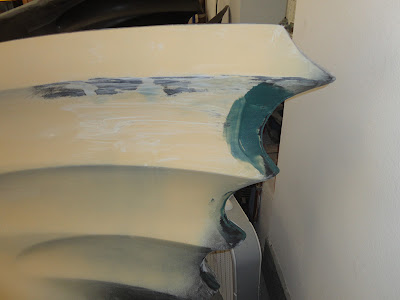 More on the front. 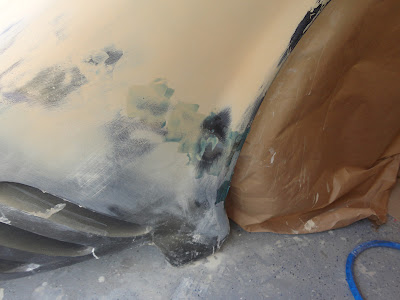 And these little vent thingies are proving to be a bit of a mess, requiring a lot of loving care. Coming along, I suppose. 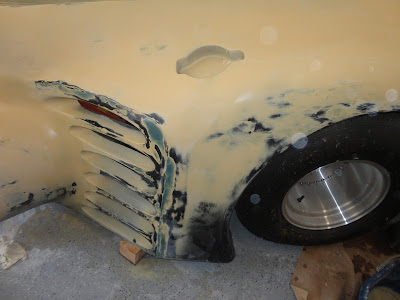 Posted by MattMunson at 5:00 PM No comments:

These two videos are sort of related, so I thought I would post them together. They are both about body work, and demonstrate some of the techniques I am using on the car.

Whoohoo! Please note that I've now got custom thumbnails for my vidz, as I'm now a youtube partner. Suck it!

Posted by MattMunson at 1:11 AM No comments: