I can't believe I have not yet posted this here:

I am doing a series of webisodes as exclusive content for The RPF, one of my favorite online discussion forums. This is the first episode.

I already have the second episode all designed in my mind. I just need to film it. I hope to have it finished shortly.
Posted by MattMunson at 8:14 AM No comments:

Also of interest today is something I stumbled upon while poking around youtube. This is footage of the development of ONE of the suits from Superman Lives, the aborted Tim Burton reboot of the franchise.

It's pretty frickin' awful, and I'm REALLY glad this movie did not happen. Still, it's interesting history here, and kudos to the folks at XFX for executing a really poor design so well.
Posted by MattMunson at 8:56 AM 1 comment:

I picked this up from Costco the other day. The main reason I got it was for the original beginning of Superman Returns. I presume it has him going back to the remains of Krypton. I've seen a shot or two of this from some of the early trailers, but have been waiting to see the entire sequence for years. I read in an interview that Singer chopped 45 minutes out of the entire movie. I'd like to see those 45 minutes replaced, though I suspect much of it was unimportant, or were plot points that didn't make sense after all was said and done. 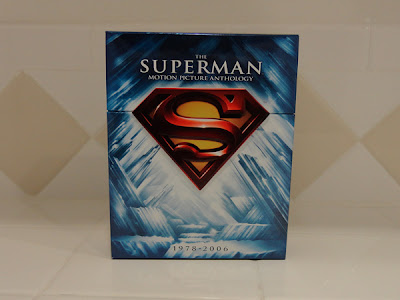 Posted by MattMunson at 8:54 AM No comments:

I don't really have a lot to say about this other than what is said in the title of this post. It's the seven dollar ring from TRU.

For seven bucks, it's not that bad. And believe me, I am NOT a fan of "close enough but really cheap" props. I think that's a waste of time. Seeing as how I have not yet seen the movie, and it could turn out to be a total disaster, I'm not yet interested in spending a bunch of time or effort in finding a screen accurate ring. I heard that TRU was offering this as a keychain. I made one trip down to my local store, and didn't find one. I pretty much forgot about it after that. BUT, the other day I was at Best Buy, and figured since I'm in the neighborhood I would drop by TRU to see if they had the rings in stock. They did, and I got one. 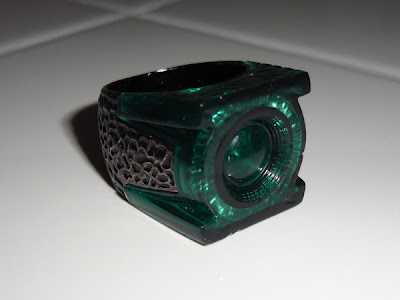 It looks pretty cool, and it ALMOST fits. It's just slightly too big. But this would really just be a display piece anyway. I've always been a fan of Green Lantern, especially the Hal Jordan costume. It's something I've wanted to make for years, but just never got around to. And I probably never will. Still, it's a neat piece.
Posted by MattMunson at 8:51 AM No comments:

This is a replica that I purchased recently. It arrived yesterday, and it's completely beautiful! This was made by a guy overseas. It's very clean, very crisp in detail, and has a great weight to it. 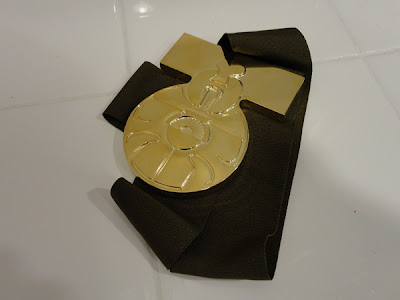 Posted by MattMunson at 1:22 PM No comments:

Intermission Episode of On The Laam Is Up!

Posted by MattMunson at 1:01 PM No comments:

Labels: On The Laam

This may look like a weird picture. It's a composite of a couple things. The brown is a scan of the underside of the Keebler fudge stick that I posted about earlier. The grey stuff is a scan of a rigid casting from the Superman Returns cape.

Note that the chocolate has a female version of the pattern, and the resin is a male version.

The great news is that they line up ALMOST perfectly. They are pretty much a perfect match, other than some TINY distortion which could easily have been introduced via molding/casting/manufacturing processes. 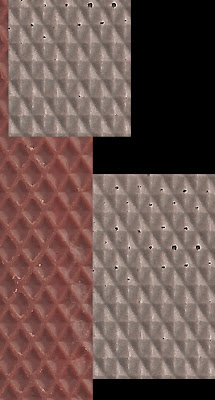 There's a couple tiny differences though, and I'm not sure how I feel about it. For now though, this is the best lead I've ever had. I'm not really sure how to proceed from here, but this is the closest I've ever been to finding something that is a near perfect match for the cape texture.
Posted by MattMunson at 12:59 PM No comments: